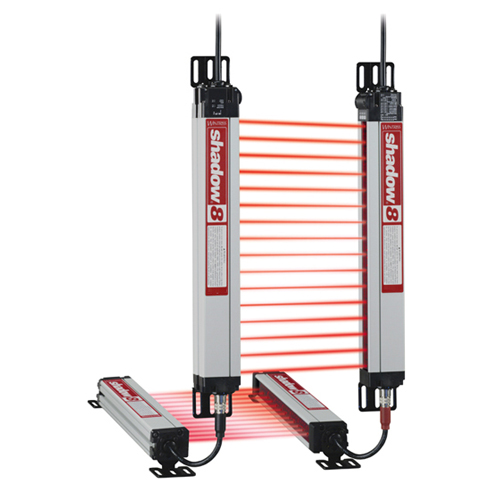 The Latest Safety Light Curtain From the Press-Guarding Experts.

Wintriss has been building the Shadow light curtains for the toughest applications for more than 40 years.   Our light curtains withstand the rigors of the pressroom, including severe shock, mechanical abuse, and lubricant spray.   With more than 45,000 systems installed, the Shadow has a proven track record.

Connect up to Four Pairs of Heads to One Control
Shadow 8's unique design enables you to protect multiple sides of a machine using a single control, one pair of cables, and up to 4 pairs of light curtains in series. You can protect both the front and back of your equipment as well as provide horizontal pass-through detection. Even a large machine can be guarded with up to 202" of protected zone to a single control providing an economical solution and minimizing installation time (for either the transmitter or receiver, the total length of the heads and interconnect cabling cannot exceed 110 feet).

Programmable Fixed Blanking
Fixed blanking windows disable one or more beams to allow stationary objects such as conveyors or work tables to remain in the sensing field.   You simply place the obstruction between the transmitter and receiver and turn the key-lock switches on the control.   Shadow 8 senses the presence of the object and "blanks" the obstructed beams.   The Individual Beam Indicators (IBIs) light up to indicate which beams are blanked.   When the object is removed, the system will not allow the machine to run until the control has been reprogrammed to "unblank" the beams.   The first or the main segment must have a minimum of 7 to 9 consecutive beams (5.5" to 7") not blanked based on its height (e.g., the 12" main segment must have 7 consecutive beams (5.5") not blanked) and 2 consecutive beams in each extension must not be blanked.

Floating Blanking Window
Shadow 8 also enables you to set a floating blanking window, one beam wide, to allow objects smaller than 1", such as air-ejected parts, to pass through the light curtain in a random pattern without interrupting operation.   This can also be useful when air or hydraulic lines need to pass through the field.   You can use both floating and fixed blanking simultaneously.

Email Us For Facts