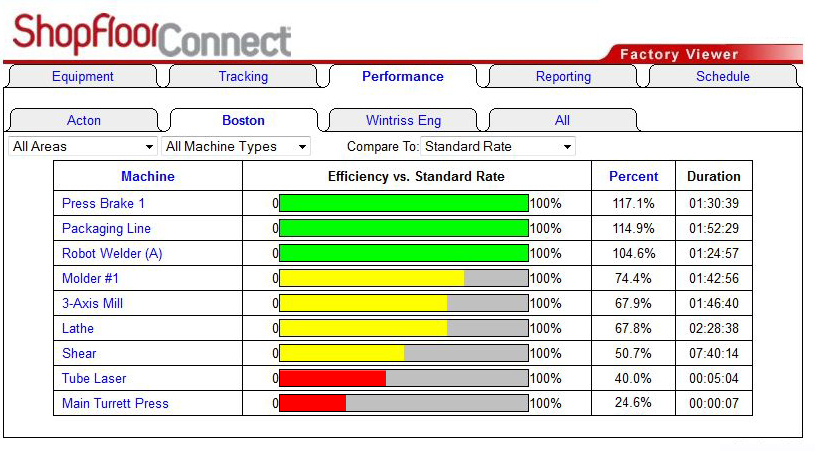 Wintriss ShopFloorConnect  (SFC) software is designed to collect and organize production data from the shop floor.  It eliminates the three common problems with manually collected data: untimeliness, inaccuracy, and bias. Considering that raw data forms the basis for all subsequent production reports – and that important decisions are made based on those reports – any problems with the initial data collection can start a ripple effect that results in a negative impact on your business. Good measurements are the basis for making improvements.

ShopFloorConnect includes a real time OEE monitoring software and production monitoring controls that allow automatic production data collection from your power presses, production machines, and work cells. The software formats the production data in an easy to use database and reporting generator – allowing you to determine overall equipment effectiveness (OEE).  Traditional expression is OEE = Availability x Performance x Quality. Traditional OEE comes up short in many applications. While the Availability and Quality metrics can be universally applied to all machine types, difficulty arises when the traditional Performance metric is applied to discrete manufacturing processes where the true “ideal production rate” is more dependent on the the parts being manufactured than the machine itself. Accordingly, Instead of using a single ideal performance rating for each machine, ShopFloorConnect applies a user determined specific ideal rate for each job segment/machine combination.

ShopFloorConnect provides detailed reports of uptime, downtime, downtime causes, and production rates. Gain an understanding of what your machines are doing – are they down, if so, how long – producing good parts or bad? SFC works with the Wintriss SmartPAC® press automation controls or the SFC Machine Interface which can be applied to most machine types.

ShopFloorConnect comes factory-configured to talk to Wintriss SmartPAC 1 & 2 press automation controls to establish cycle counts, machine speed, and run time – down time. It can also monitor many data points, quality metrics, and down time causes that SmartPAC monitors. Additionally we offer the SFI Machine Interface which is the fastest way to connect virtually any machine to the SFC Factory Reporting Software. The SFC is Ethernet-ready, and factory configured to drop right in to your existing SFC installation and begin collecting data.

You can use the ShopFloorConnect Configuration Detail page to create custom downtime menus for each machine, and download them directly to the SMI.

The SMIs feature a downtime selection menu that takes full advantage of the touch-screen interface to streamline operator input. The SMI also has an additional “Setup” input that allows time spent doing troubleshooting and setup to be appropriately logged even if the machine is cycled.

The SMIs feature an improved downtime selection menu that takes full advantage of the touch-screen interface to streamline operator input. The SMI also has an additional “Setup” input that allows time spent doing troubleshooting and setup to be appropriately logged even if the machine is cycled.

The scheduling interface feature in ShopFloorConnect allows you to create a queue of jobs to run in each machine. You can either import a schedule from your existing ERP software, or use ShopFloorConnect’s web browser interface to select the appropriate jobs and the quantity of parts required. You may optionally enter a job number and/or due date for each job.

Once a schedule is created, ShopFloorConnect automatically sends the “next job” information to the Machine Interface When it’s time to run the next job, the machine operator simply selects “Load Next Job” and the information, including the good parts counter preset, is retrieved from ShopFloorConnect. The top item in the schedule is then automatically “consumed” and the queue moves up.

ShopFloorConnect predicts the completion time/date for each job in the queue with an industry-best algorithm that analyzes real-time as well as historical changeover and production data. ShopFloorConnect alerts you whenever job completion is due to occur later than the due date. The scheduling interface features a simple intuitive interface that allows you to edit job parameters and reposition jobs within the queue.

How Does ShopFloorConnect Differ From Other Data Collection Packages?

Have Questions and Need Answers?